The first day of our trip was spent driving from our palatial estate in lovely Beavercreek, Ohio, near Dayton, to Niagara Falls. It was a rather uneventful drive, aside from the glaring $4.05+ gas prices that loomed at every gas station. It wouldn't be a cheap trip, but for four people, it would be cheaper than flying. We did notice a fleet of about two dozen corvettes at a gas station. It turns out that they were the Capital City Corvette Club from Columbus, Ohio out for a trip to Niagara Falls. They stayed in the Crowne Plaza just like us, so it was very scenic walking through the parking lot. 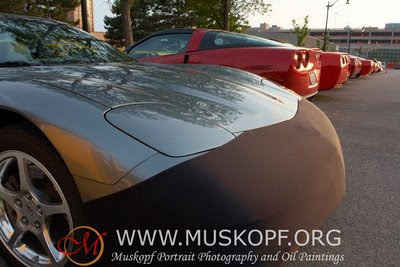 We didn't waste any time after stowing our gear, and proceeded to drive down to the Falls. We should've walked since it wasn't that far and we had to pay $10 for parking!--but, hey, we didn't know. We made straight for the Maid of the Mist and my crew donned their official Maid of the Mist blue parkas. 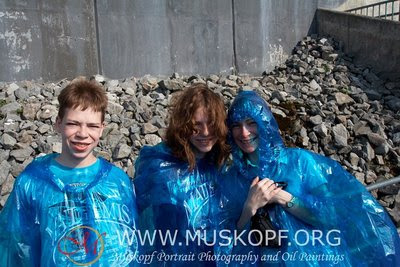 They which were a little like wearing a brightly colored translucent garbage bag, which blew in the wind like a sail. 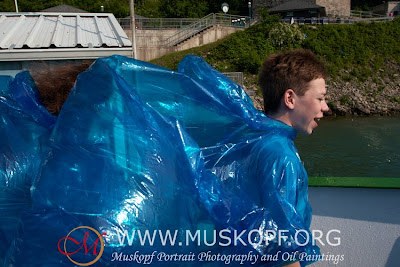 I had fortunately brought my own heavier parka, which didn't blow around and didn't interfere when I took photos. 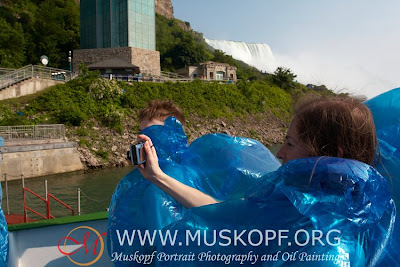 The trip commences and we get our first glimpse of the American Falls. 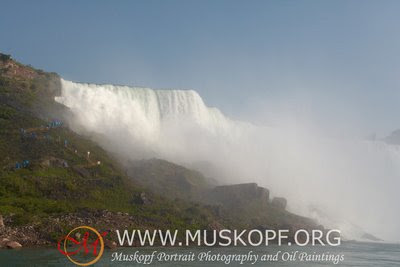 Lovely, with a permanent rainbow. 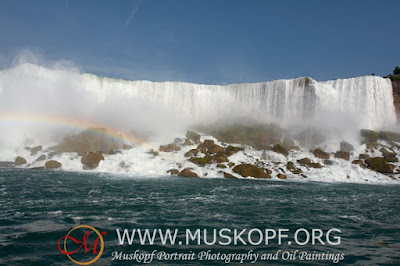 As we approached the Canadian Horseshoe Falls, the water got choppier, and the spray was like walking through a car wash. 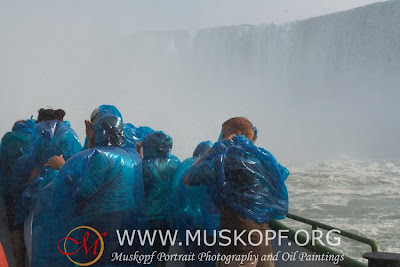 The photo opportunities were limited at this point, as everything became a sheet of white. 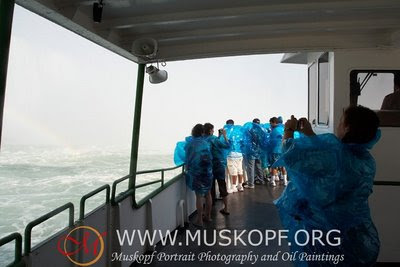 The Maid of the Mist was definitely the highlight of our stop in Niagara. 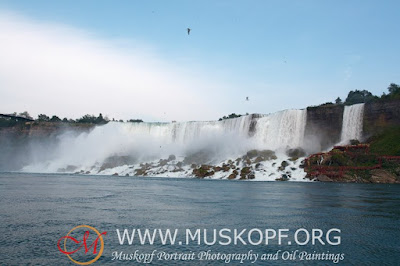 Getting food was a challenge. They seemed to have a moritorium on restaurants, as we didn't find one, despite driving for about 30 minutes up and down the main highway. We finally found a Denny's where they were definitely aware of the food shortage for dumb tourists like us. Maybe I'm wrong, but I don't remember omelettes costing $11.00 in Ohio. We stayed across the street from the casino, and, although we had no interest in participating in that sort of fun, we were kept up much of the night by drunks stumbling and laughing up and down the hallways. The next morning we were very eager to get back on the road.
PHOTO TIPS: Use a wide angle lens. Bring your own heavier parka as the blue ones will be a nuisance. Bring a soft cotton towel to continually dry off your lens and camera--my towel was really wet at the end of the voyage. Wrap your camera: I use small white garbage bags and gaffer tape to make a rain covering. Poke the lens through the bottom of the bag and tape the bag to the lens hood. The open end just falls over the back of the camera, leaving an opening for hands and the eyepiece. Since this was fresh water, I didn't have to be overly paranoid. If it was salt water, I would've wrapped up everything except the eyepiece. Salt water kills cameras.
Posted by Todd Muskopf at 5:16 AM