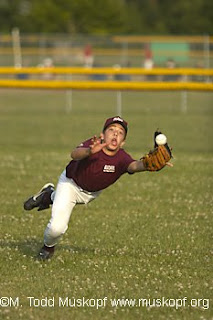 Actions shots. I get a lot of people asking me how to get good shots of fast-paced movement. Part of this is is technical--camera settings, lenses, etc., part is timing-- waiting for the "decisive moment" and just nailing it when you see something about to happen, and part of it is creative--how much action should be stopped vs. how much blur do you want?

First of all, the camera settings. You're going to want a relatively high shutter speed for action. The more action you want to stop, the higher you want the shutter speed. The baseball player here was shot at 1/2500th of a second at f/4 ISO 400. It stops him in mid-lunge and you can see the ball falling just beyond his glove. Timing was really important in this one to get the ball in the frame.

To accentuate movement, use a slower shutter speed with a panning action for laterally moving objects, like the girl in the go-kart. To get the blurred background, I moved the f-stop to f/22 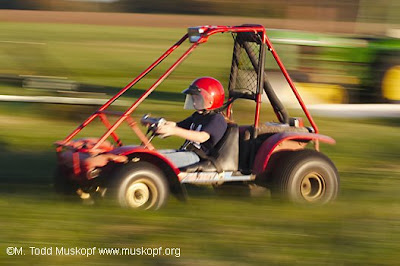 and shot this at 1/13 second at ISO 100. By panning at exactly the same speed as she was moving, she stayed in focus, and it looks like she's going really fast. 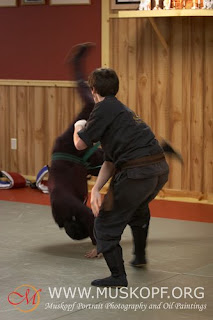 distract them from their dangerous moves. Yes, I find it challenging. That being said, I choose lenses which are f/2.8 or faster and use either ISO 800 or 1600, depending on how much blur I want. The one of the young man seen from the back with his adversary being thrown (upside down) was shot at a relatively slow shutter speed, 1/80th of a second at f/2.8 and ISO 800. The "thower" is sharp, while the "throwee" is a blur. This emphasizes the speed and motion.

To get crisper motion in the same location, I changed to ISO 1600, f/2.0, and was able to get 1/320 sec shutter speed, which allowed me to get the gent on the ground kicking his adversary overtop of him without much blur. 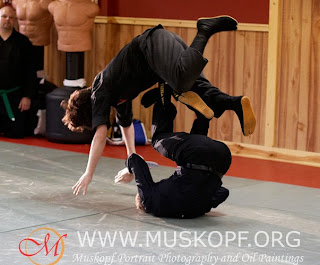 So, I think you can see that the main difference in these pics is the shutter speed, but in order to get the shutter speed you want, you have to manipulate the other two variables, ISO and f-stop. Once you get a handle on how these three factors work together, you'll be far along towards getting the shots you want. Remember, YOU are in control.
Posted by Todd Muskopf at 10:11 AM No comments: 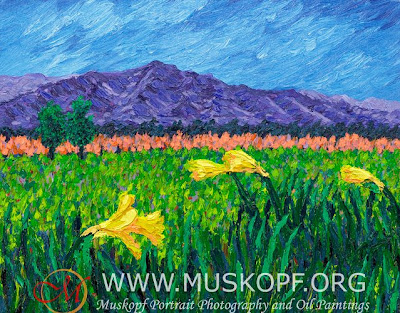 In March, we made the trek down to Tennessee and visited the Smoky Mountains. I just finished two paintings from the trip, both from Cades Cove (one of my favorite places in the world).

I thought I'd offer a few tips on how to use your camera to produce better photographs and have a better experience with your equipment. These are random thoughts, but things you might not be doing.

1. Always put on the neck or wrist strap. My sister-in-law was using a camera on the bleachers (Nikon film body and lens) and somehow dropped it. It fell roughly ten feet, hit the ground and the lens mount (which was plastic) shattered, so the body bounced in one direction and the lens in another. Not a good day. Don't drop your camera.

2. If you're using your camera at the beach, wrap it up. I was in about a foot of water a few years ago at Virginia Beach shooting pics of the kids and a wave came up behind me and two tiny drops landed on my vertical grip. I wiped them off immediately, but the grip was toast. Salt water kills cameras.

3. Use two hands. Blurry pics can happen because the shutter speed was too slow and either the subject moved or the camera moved. You can only control the camera, so learn to keep it steady. I think it's hilarious watching people hold their cameras out with one hand and snap while their talking. I can actually see their hand moving during this process, so you know there's going to be a lot of camera shake. Try this: Use two hands. Bring your elbows into your body and lock them against your ribs. Spread your feet out slightly, back foot at a different angle than the front. Press the viewfinder against your eyebrow (if you have a viewfinder). If you don't have a viewfinder, then just try to focus on holding the camera steady. Depress the button half way to get focus, then continue squeezing to get the shot. DO NOT push the button and immediately let your finger fly up like you've tapped a piano key. If you watch a military commando turn his whole body with his eyes and weapon in the same direction at all times, and squeeze slowly to fire, that's very similar.

I'll post more later.
Posted by Todd Muskopf at 4:38 AM No comments: 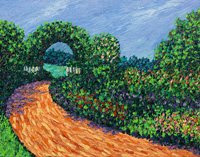 Paintings
I’ve been working on a series of paintings involving formal garden paths. I’ve managed to finish four of them so far, all 22 x 28”, and I’m happy with the results. They make me eager for the coming summer!

I’m currently deciding what my next batch of paintings is going to be. I’ll let you know when I get them underway.

Portraits
I shot my first CD! Taborah, formerly of the band Blackwood, is in Dayton and just finished her first solo release and came to me to shoot the photos for her CD cover and liner notes. It was a fun and energetic session and I’m looking forward to seeing the CD when it’s released this summer.


I had lots of other great shoots for families, models, and actor headshots recently. It’s been really fun to work with all the great people I’ve been so blessed to photograph. 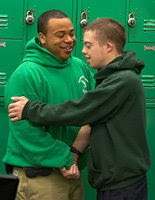 Photojournalism
One of my favorite shoots recently was when the Sisters of Notre Dame de Namur hired me to shoot a series of photos depicting the way students with physical and mental disabilities are welcomed and integrated into the fabric of student life at Chaminade-Julienne High School in Dayton. It was very inspiring to witness the way the students were accepted by the greater student body. There are good teenagers! A few of the photos were printed in the SND quarterly magazine Cross Currents, which you can view here http://www.sndohio.org/crosscurrentswinter08.pdf

Travel
We were able to make the annual trek to Tennessee for spring break this year and I spent several days shooting photos in the mountains. It’s always so nice to get away to the mountains and get a little sneak peak of spring. I’m hoping some of these photos will emerge as new paintings in the near future.

My kids are doing great. They are really involved in their To Shin Do martial arts. They graduated to the blue belt level last month and are continually becoming more confident, disciplined, and dangerous!

I recently gave a talk to a local Cub Scout Pack about different types of careers in the Art field. It was really fun to see the excitement in the kids’ eyes when they were dragging their fingers across the thick paint of the painting I had brought as an example. It’s always great to give back to the community whenever possible.

The Miamisburg Art Guild retained me to judge their annual art show this summer. I’m looking forward to seeing the works created by these aspiring artists and to be able to give awards and encouragement to them.


Odd’s & Ends (Silly fun stuff)
Don’t stop having fun! My son bought me a pair of Heelys for Christmas, which are shoes with weels built into the heels. They’re really fun! It took me a few weeks to get the motion down, but now I find it really fun to walk out of the grocery store with two gallons of milk in my hand and roll down the parking lot to my van. You should see the crazy looks I get from the other adults!